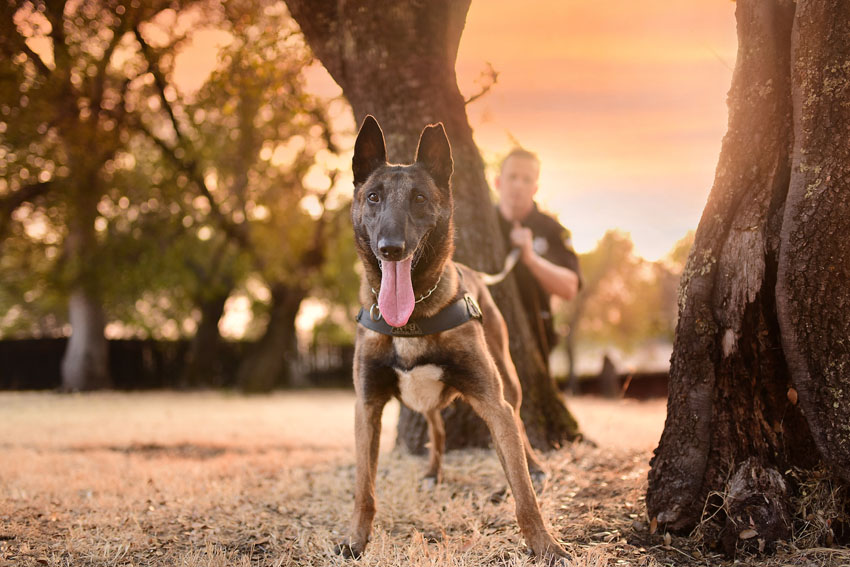 When a suspect attempts to elude capture from law enforcement by running or hiding or when a person is missing and needs to be found, a canine and his handler are usually on the call to assist Deputies. One of the ways a dog can help locate these subjects is by tracking. It was once believed that only certain dogs possessed the desired characteristics to be able to distinguish the odor of a certain person and track or trail that person. However, the world of dog training has evolved over several decades and we now know that dogs other than hounds are able to track or trail with great success.

When any person walks through an area, they crush vegetation and leave small particles of their own shoes on the ground. Also left behind are skin rafts and traces of that person’s clothes. Everything that is left behind about that one person is as distinctive as a fingerprint to a dog’s sensitive nose. The weight of a certain person decomposes vegetation at a different rate than that of another. A person may be wearing a certain deodorant or may have used a certain shampoo. All of these things combined leave behind a trail that a trained canine can follow.

Using a tracking harness and a long lead, a handler follows his canine as he tracks the trail left by the subject they are looking for. Suspects think that walking through hard surfaces or through areas with heavy foot traffic they can evade capture but a dedicated canine and handler can work through these obstacles. The only real obstacles that can hinder a successful track are heavy winds or areas that cannot be tracked through, such as a suspect climbing a roof during his escape.

Usually a track that is no older than 30 – 45 minutes and non windy conditions are all that are needed for a handler and his canine to begin tracking. The Sacramento County Sheriff’s Department Canine Detail has many good apprehensions from tracks. Many times by tracking, canines and their handlers have been able to find crucial evidence or be able to tell a suspect fled the area in a vehicle. This information would not have been available to Deputies or Detectives investigating the case if the canine was not able to successfully track.