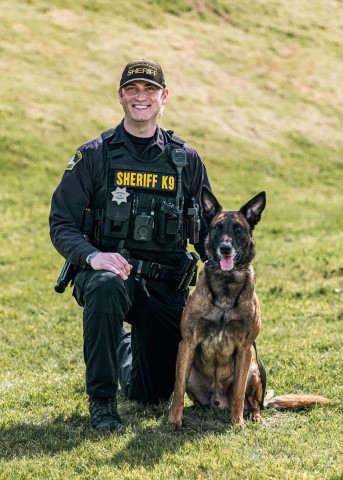 I started my career with the Sheriff’s Department in October of 2012 as a recruit in the Sheriff’s Department Basic Academy (12-SBRA-1). After graduating the academy, I was assigned to the Rio Cosumnes Correctional Center as well as the Main Jail. During my time at the Main Jail I became a Jail Training Officer, a member of the Custody Emergency Response Team (CERT), and a Gang Intelligence Unit Officer.

In May of 2016, I was transferred to Field Services and assigned to the Sheriff’s Department’s Central Division. During my time in Field Services I worked as a patrol deputy and also a member of the Shot Spotter Unit that was created in January 2018.  Shortly after completing field training in 2016, I began attending weekly K9 trainings. Becoming a K9 Deputy had always been a goal of mine and I was grateful for the opportunity to learn from the current K9 handlers on the team.

In August of 2018, I was selected as a K9 handler. My new partner, K9 Dax, had recently arrived from overseas and we instantly bonded. K9 Dax was one and a half years old and full of energy. We began our several month training course before going out on patrol.

Although K9 Dax would rather be working, when he’s off he loves playing with his two best friends Bailey and Raylan (personal German Shepherds), watching the chickens, and chasing around his favorite tennis ball.