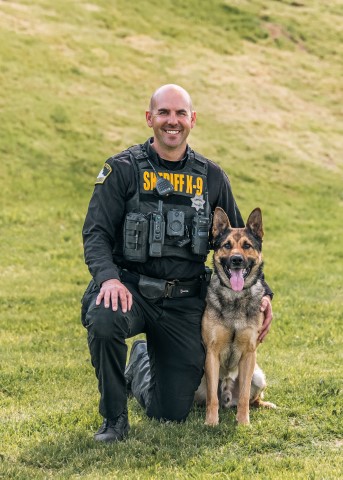 I started my career with the Sacramento County Sheriff’s Office in 2012 working as a Community Service Officer. While working full time I paid my own way through the Sheriff’s Office extended (night) academy. After graduating from the academy in 2014 I was fortunate enough to receive a full-time Deputy Sheriff position and was assigned to the Main Jail.

I worked at the Main Jail for 10 months and at Work Project for a year and a half before transferring to North Patrol. After passing the field training program I was assigned to work graveyard and spent the majority of my patrol time working the North Highlands, Antelope, and Rio Linda Area; eventually becoming a Field Training Officer.

At the beginning of 2019, I tested for the position of Canine Handler and was successfully chosen to be the next K9-4. After being chosen I was eventually paired with K9 Bolt. Bolt is a Belgian Malinois/German Shepherd mix and is from the Netherlands.

After certifying with Bolt and passing the training program we began working the streets of Sacramento County. When Bolt is at home he enjoys being a normal dog, running around the yard with his Chuckit ball, and playing with my personal dog.